Top Impacts of Cuba Being Removed From “Terrorism List” 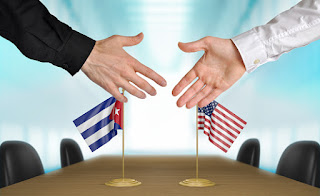 As you know, the President made a big announcement back in December, 2014 that the US would take historic steps to chart a new course in our diplomatic relations with Cuba. One specific action item was instructing the Secretary of State to immediately launch a review of Cuba’s designation as a State Sponsor of Terrorism, and provide a report to the President within six months regarding Cuba’s support for international terrorism.

Within four months of the President’s announcement, on April 8, 2015 (2 months early!), the Secretary of State finalized their review and recommended that Cuba no longer be designated as a State Sponsor of Terrorism.  Thereafter, on April 14, the President sent Congress the statutorily required report indicating the Administration’s intent to rescind Cuba’s State Sponsor of Terrorism designation, including the certification that “Cuba has not provided any support for international terrorism during the previous six-months; and that Cuba has provided assurances that it will not support acts of international terrorism in the future.” Members of Congress, initially vowing to block the removal of Cuba from the “terrorism list” had no legal outlet to voice their opposition, and as of today, the 45-day Congressional pre-notification period has expired. As a result, the Secretary of State has officially made the final decision to rescind Cuba’s designation as a State Sponsor of Terrorism, effective today, May 29, 2015.

The Department of State issued a Press Statement today advising that:

Below are the top 4 impacts I foresee as a result of Cuba being removed from the State Sponsor of Terrorism List (leaving only Iran, Sudan, and Syria now on the list):